After 7 games, Chip Kelly’s Eagles are 3-4. Incidentally, through 7 last season, Reid had also earned a 3-4 record. This parallel shouldn’t come as too much of a surprise: Despite a massive overhaul of the defense, the Eagles still can’t stop anybody. We expected this. DC Billy Davis has a long history of putting together middling to bad defenses, and he has very little talent to work with. On the other hand, there are few new faces on offense. Jason Peters returned from injury, Lane Johnson was drafted, and Jeremy Maclin tore up his knee (and nobody sane can call Riley Cooper an upgrade at that spot). All told, 8 of this year’s starters on offense also started last year, and 9 were active on last year’s squad.

So the defense still stinks, the offense is comprised of the same stiffs, and their W-L records are identical. Sounds like a perfect time to compare the two groups! And since we know both defenses were/are crap this deep into the season, I’d rather just focus on the offense. The raw numbers are after the jump, but this graph really says it all.

(A quick explanation of what you’re looking at: For every stat above, 0 represents the NFL average after 7 games. If you’re not familiar with standard deviations and z-scores, just know that in general a score greater than 0 is above average, greater than 1 is good, and greater than 1.5 is close to the top of the league. The reverse is true for negative numbers.*)

END_OF_DOCUMENT_TOKEN_TO_BE_REPLACED

Don’t Get Too into Eagles Hype

After the Eagles trounced Washington it was hard not to be excited. Chip Kelly is a new coach using never before seen NFL formations in a way that allows the Birds talented offensive core to rip defenses to shreds. We were geeking out here at The Wooder Cooler afterwards and gained a firm belief that this team is going somewhere.

See! This season’s supposed to be a party!

However, the Chargers game—which destroyed millions of cases of Chipatidis—is far more important to this season. After being made into a golden god the week before, Chip looked like a true rookie as he mismanaged the clock on the Eagles final drive, called timeouts FOR THE CHARGERS on their game winning field goal, and admitted to not knowing a rule after the game. It was a tough loss in a good game and that sucks. Especially when the game is at home.

However, the important thing is to not lose sight as to what this team is. Before the Eagles were playing games nearly everyone expected this team to be around 6-10 and begin the two to three year rebuilding process. It’s still the same team as you could tell on Sunday. There were bad penalties from rookie Lane Johnson, a missed field goal, some dropped passes, and a miserable showing from the secondary.

This team isn’t a Super Bowl contender. If you think they can compete against the 49ers, Seahawks, Packers, Bears, or Falcons you’re mistaken. The Eagles need time to adapt to their new schemes and bring in the proper personnel.

I say all of this because reports are that lots of people left the game early with complaints about how the team failed and that fans wanted their money back. That’s completely unfair and unrealistic (Of course you’re not getting your money back).

This isn’t 2008. It’s more like the 2011-2012 Sixers. If they make the playoffs, great. But if they don’t, they’re still fun to watch because they have a reasonable chance to win every night.

Thursday night, for example, is possibly going to be the most fun all season with the Chiefs in town. The Visor vs. Tommy Bahama in Philly is about as good as NFL storylines get. So maybe on Thursday you have a beer, enjoy the evening with your friends and family, and tell Andy Reid to go fuck himself from your favorite chair. Just live in the moment, you know?

Like I said, this year is all about fun. Enjoy it.

And Now We Know: The Eagles 2013 Draft Reflection

There has been a ton of speculation regarding the changes that would inevitably take place once Big Balls Chip Kelly was hired as the head coach of the Eagles. So far, most of the analysis has been fairly shallow.

He’s not a bore at his press conferences, he plays music at practices, he talks a mean game about having a mean team. That’s fantastic, however, still only a few crumbs of food from a king’s feast. The draft finally provided an opportunity to develop a sincere understanding of Chip’s philosophy and the general direction of the franchise.

The key word at the center of this draft is the word versatility. Every player that the Eagles drafted this year (Barkley excluded) has the ability to be used in multiple looks. Lane Johnson can play left and right tackle, Zach Ertz could feasibly be four different positions on the field on any given play, and guys like Jordan Poyer played safety and corner in college. All of this plays to Chip Kelly’s favor and supports his notion of putting players in the position to succeed.

Many times that sentiment is lip service from coaches. Andy Reid had a square peg (Michael Vick) and bludgeoned it to smithereens with a hammer (passed 45 times a game). This attitude of fitting players into a scheme rather than catering to their talents is a disservice to the team, the organization, and the fans.

END_OF_DOCUMENT_TOKEN_TO_BE_REPLACED

Kelly and the Reid Conundrum

While Chip Kelly has been assembling his staff (and hanging out at the Wing Bowl), there’s been a key piece still missing: defensive coordinator.

So, despite the bevy of “unofficial” assistants with undefined roles wandering around in Eagles green I have to ask myself one simple question. Does Chip Kelly have any clue what took place the last two years?

This year has a similar feel.
END_OF_DOCUMENT_TOKEN_TO_BE_REPLACED 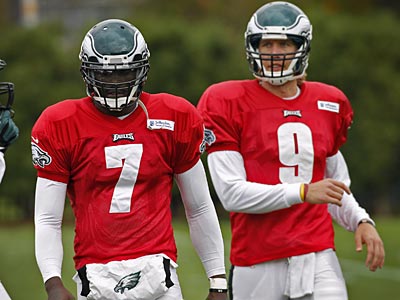 Although some have already written off the possibility that Nick Foles could play for Chip Kelly next season, Kelly has indicated that he’ll tailor his system to the players that he has and will not really be running an ‘Oregon Offense’ in Philly. So the possibility remains that Foles could earn the starting job next season, and that deserves some analysis. Or in this case, a lot of analysis.

Heads up: All of the statistical analysis of Nick Foles below comes with the caveat of a small sample size, and we all know that weird things can happen in a small sample (i.e. Bryce Brown had the highest rushing-yards-per-game average after starting 2 games). So yeah, it’s academically improper to draw conclusions from a small sample… but where is the fun in that?

Andy Reid has long been considered a ‘Quarterback Guru’ by analysts, experts, and league insiders. You can make a good case that this reputation was rightfully earned, not just for Donovan McNabb’s success and Michael Vick’s career rehabilitation, but also for making Kevin Kolb and A.J. Feeley look pretty enough to trade, and earning a playoff berth with a zombie that was once named Jeff Garcia.

After enduring several weeks of repeated trauma at the hands of opposing defenses, Vick suffered a brain injury against the Cowboys in Week 10. Reid was then tasked with making the most out of newcomer Nick Foles for a stretch that concluded with the rookie breaking his hand in the season’s penultimate game. Foles finished that game, by the way. You can knock these guys in a lot of ways, but you sure can’t say they aren’t tough.

Anyway, here’s how he and Vick stacked up at the end.

END_OF_DOCUMENT_TOKEN_TO_BE_REPLACED

UPDATED: 1/4/12 -ESPN is reporting from multiple sources that Bill O’Brien has decided to remain at PSU.

Contrary to reports that both had been fired, Andy Reid’s remaining contract has been traded to the San Diego Chargers for the rights to general manager A.J. Smith.

“I myself believe, as many of you believe, that this team needs a culture change,” team owner Jeffrey Lurie announced to the media on Monday. “I’ve studied the past couple seasons, and it’s obvious we’ve regressed significantly since the departure of Joe Banner. Howie Roseman is our most skillful talent evaluator, but frankly he just isn’t enough of a dick.”

END_OF_DOCUMENT_TOKEN_TO_BE_REPLACED

Andy Reid Fired: The Taxing End of an Era

After 14 seasons Andy Reid has been fired as head coach of the Philadelphia Eagles. I’ve been waiting about ten weeks to write that sentence, but I didn’t realize how much writing it would actually impact me.

Reid? Fired? It reminds me of how I felt when I heard that Brian Dawkins signed a deal with the Denver Broncos: confused, concerned, and empty.

Confused by the absence of the guy who has led this team since I was nine years old. The guy who took us frem Bobby Hoying to Donovan McNabb, to regular NFC championship appearances, and a Super Bowl. While I have flashes of memories from the pre-Reid era, Reid has been the embodiment of Eagles football for as long as I’ve been an obsessive fan. It’s bizarre to know that all of the moments and players and games that I remember – my entire childhood of football – are now the symbols of a crumbled empire. History.