Just in case anyone was worried that a healthy, mid-season return by 6th overall pick Nerlens Noel would galvanize a Sixers roster full of chaff into a team capable of winning actual basketball games and thus sabotaging our A-1 Abrams of a season, don’t. (after all, that run-on sentence was far more concerning)

Head coach Brett Brown revealed that our prized rookie will likely be held out the entire season to  fully recover from a torn ACL suffered last February.

Here’s the full story outside of ESPN’s Insider status

So there ya have it, something else to look forward to in the oh-so-distant 2014-2015 campaign. And, yet another reason to avoid CSN every other night between October 30th and April 16th.

END_OF_DOCUMENT_TOKEN_TO_BE_REPLACED

Around the Cooler 8/16/13: A Golden Era Dies in Philly; Two Careers Begin

It’s the end of an era

What are you talking about around the wooder cooler this week? Leave us a comment! 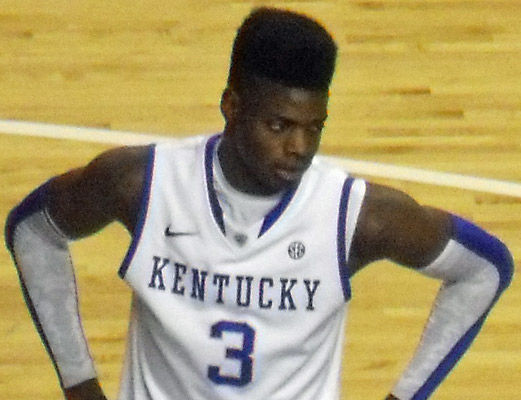 The Hi-Top Fade is making a comeback!
Image via Wikipedia Commons

The stat geeks are taking over Philadelphia. Isn’t it great?

It’s time to upgrade our thinking – and our platitudes – for the 21st century. Screw inches. Our beloved pastimes are really all games of probability.

And Philadelphia’s teams are finally catching up. It’s about damned time.

The two most recent hires in the big four of Philly sports, Eagles head coach Chip Kelly and now 76ers GM Sam Hinkie, are not traditionalists. The foundations for their respective philosophies, Chip’s playcalling and Hinkie’s talent acquisition, are built on foreign, impenetrable, numerical concepts such as “expected values.”

Many people have a problem with probabilities – and by extension the study thereof, that mathematical voodoo known as analytics. The term ‘analytics’ often conjures a couple of images, and neither are particularly flattering. One is that of the pasty, bespectacled weakling with a pocket protector and a TI-89, jealously crunching numbers as he fantasizes about athletic prowess he’ll never have, cheerleaders he’ll never date, and popularity he’ll never achieve. The other, more sinister depiction is the business executive in a 15th floor office furnished with exotic hardwoods and floor-to-ceiling windows, dispassionately assigning numbers to real people from high on his throne and then buying, selling, or trading them as he might deal in rice futures or credit default swaps. But stereotyping aside, I suspect most fans simply misunderstand the concept.

END_OF_DOCUMENT_TOKEN_TO_BE_REPLACED

UPDATE: We taped this podcast just before news broke that OLB Connor Barwin signed a 6-year deal with the Eagles.

Think the Sixers’ season and future is completely derailed by Andrew Bynum? Think again! ESPN released their list of top 25 NBA players under the age of 25 and wouldn’t you know it, there are two 76ers on that list.

Despite how hard I tend to be on the hometown hoops team (I do it out of love, I swear) this is actually a pretty big achievement, especially for a team as down in the dumps as ours currently is.

The rankings are based on current stats, natural potential, projected wins above replacement player (WARP) over the next 3 seasons and, well, age (duh).

In case you hadn’t been able to guess the two yet, the big unveil:

END_OF_DOCUMENT_TOKEN_TO_BE_REPLACED

What excitement will the the new year bring for the 76ers?

There’s really not much the Sixers can do, which can be pretty annoying.

This appears to be a fairly pedestrian team and one that is slightly worse than those from years past.

With much respect to Ransom, I don’t think the Sixers are going to contend for a top draft pick with the current group. Really, if the end goal is a core built around Jrue Holiday, Evan Turner, Thad Young, Lavoy Allen, and two difference-making draft picks, will it ever be possible to draft high enough when four of those six pieces are already in place?

As encouraging as Jrue Holiday has been, he’s still not a guy you can build around, basically putting the Sixers in the same spot they’ve been since the Iverson era.

I agree that a fringe playoff team is the worst place to be in the NBA, but, even in a fairly awful season in which Holiday has missed time, the Sixers are 15-18 and competing for a playoff spot.

The teams that will get those elite draft picks have less than 10 wins. I hate to say it, but the Sixers are too good to go the draft route unless they completely nuke the roster, which is unlikely with Holiday in the fold for the next four years and Turner likely to follow.

So, what can they do?  END_OF_DOCUMENT_TOKEN_TO_BE_REPLACED